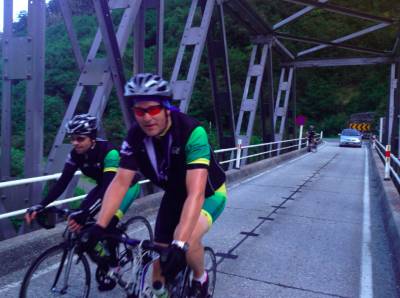 Today's ride was really, really good. In the sense that for most of Team 27 it will rate in their best ever or at least top three rides they have ever done. They suffered but that is always a given, but the conditions and environment were out of this world. For those who have traveled Haast to Wanaka you will understand what I am saying.

It has a mountain pass around 45km out of Haast which is a category two climb and then some great downhills, long sweeping roads (and a tailwind always helps!) where we were able to really wind up the pace. It then moves into lake territory where you ride next to a massive lake (Lake Hawea) for around 20km. In a sense we were lucky to get through as Haast Pass still closes at times during heavy rain due to a large landslide some months back that has not been completely cleared and secured. We had no plan B if this was the case as there is simply no way through to Wanaka unless the pass is open.

But don't let the "top three rides ever" fool you; there are a few stories to share out of the day. It was not uneventful. Team leader Andrew Francis has introduced the "donkey award" (or whatever little animal friend we can find in Wanaka that can be attached to a bike!). The donkey award goes to a majority team vote for the dumbest, craziest, laziest rider for the day. Today's nominations went to:

Out of the three nominations our first donkey award went unanimously to mad dog, who accepted his fate to carry the donkey or whatever little animal is purchased. It was a good day.

The only thing I am not happy about was missing video opportunities of team 20 members Jess hurling after reaching the top of Haast Pass (well done!) and Marty arriving into Wanaka with camo-style bike oil all over his face and arms? I am yet to find out what that was all about?

When you subscribe to the blog, we will send you an e-mail when there are new updates on the site so you wouldn't miss them.