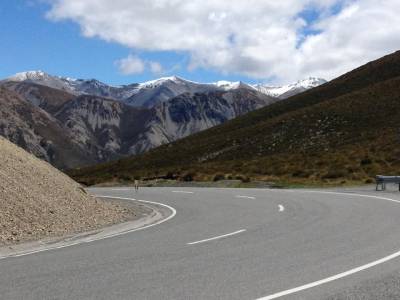 As I write this blog team 20 are still on the road and its 6:51pm New Zealand time. They are expected to arrive into Franz Josef around 8:30pm. They left Authors Pass at 6:10am putting a total riding time of 13 hours 39 minutes. That is a massive day on the bike. Team 27 arrived just past 4:30pm. On average team 20 will ride for 25% longer each day which means they will sit on their small [very small] bike seat for 13 hours longer than team 27. The physical and mental drain is huge as saddle sores increase (they really, really hurt!) and mentally knowing that each day team 27 arrive with an extra 1-4 hours of down time must be debilitating at times. In short sometimes it must be really painful being a slower cyclist. But I am sure this only adds to what they learn about life and themselves.

Over the years because of these physical differences team 27 have been at times unfairly named as egotistical, arrogant, uncaring, self-centred you name it, it has been said about this group. But what people dont see is what stood out today.

Today's ride was a 234km journey from Authors Pass to Franz Josef. We started in 3 degrees and it was wet (freezing). If it was simply a training ride you would pull the covers over your head, switch off the alarm and go back to sleep. But we cannot. We have to continue. From start to finish nobody in this team missed a turn over the 234km. To non-cyclists this simply means as you rotate as a team, cyclists will stay at the front and push into the wind for a period of time before they rotate through for the next cyclist. This means that the cyclist behind you is working 20% less, saving energy. As you start to suffer more and more generally on a ride of this length cyclists will begin to miss there turn (even much sorter rides!), meaning you leave the hard work to others while you sit out at the back. At times it is left to 2 or 3 cyclists to do all the work to get the team home.

From about the 160km mark I starting asking the riders how they were feeling more regularly. Up until this point most were saying "doing ok". But really they were all hurting past the 100km mark (faces tell the story!). Something happens though when you reach a certain point of suffering; you begin to become more honest with others. So hence past the 160km mark everyone was saying "I'm hurting!?" But that still left 74km or around 2.5 hours to complete the day and yet they all still did their work at the front, even though they were all hurting bad.

Personally I have never seen this before, and both Andrew Francis (team leader) and I were in disbelief at how everyone was willing to suffer because they knew the rest of their team mates were also suffering. To me this is a massive testament to everyone. They did their job to get everyone home together. Personally I am glad it didn't go past 234km as I was very sore, and even though Andy wouldn't admit it, it was obvious he was in pain as he couldn't speak without slurring his words after the day was done.

Very impressive and maybe there is something we can all take from this about pain, suffering and working together to get everyone through it.

Tomorrow there will be some very tired riders.