The NZ Challenge - Ready To Go!

At 5:30am the Aussie contingent arrived at Brisbane airport for the New Zealand Challenge. For some it would be their first flight oversees (yes New Zealand is a separate country!) for others there would be other things occupying their minds, like why did I not train more than I did?! Either way there was a nervous energy as the team checked in for their flight. 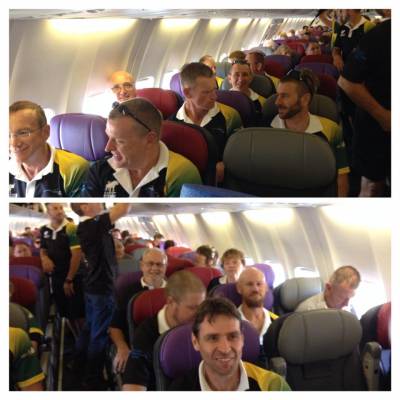 At 3:00pm the team arrived into Christchurch; overcast but with a seemingly good weather forecast for the next two days at least. Bikes were assembled and last minute team meetings outlining again the basics of getting through day one, a 155km ride up to Authors Pass. Andy Hellinga (team leader team 20) asked his team how they were feeling, taking a caring approach, while Andrew Francis (team leader team 27) told his team they have to average 30+ on the flats or he would start to cull. Basically this is the difference between the teams! But all seem to thrive in their respective team environments!

So for now we are in Christchurch, looking at taking one small step towards our end point at Milford Sound one thousand kilometres away. In between these two points there is going to be a whole lot of stuff go on. It's going to be good. People are going to suffer, but we are all going to get to know each other really well, and that is the definition of adventure. And on a small note, it seems like all the blokes who packed their own bags forgot towels. Which for some was a good thing, as our first nights? accommodation has ?shared facilities? which can be a little daunting at times!

As many of you would know, all of this pain is in aid of assisting vulnerable children within four small communities of Ndola, Zambia. To date the team has raised enough to support 80 children into school and over $20,000 thanks to over $15,000 raised by our bro's in NZ!

When you subscribe to the blog, we will send you an e-mail when there are new updates on the site so you wouldn't miss them.

NZ Challenge - Day One: Christchurch to Arthurs Pa...
Next up: The Surf Challenge