The team behind the scene 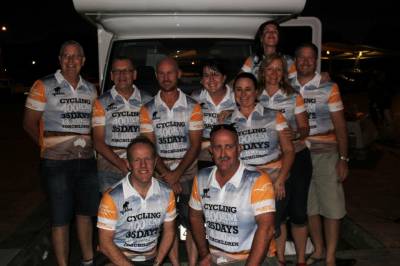 Reid  often says that the ride is not about him, and I think that everyone on the support crew would say that it’s not about them either – however, they’re a terrific bunch and I’d love to take a few (hundred!) words to introduce them to you and give you a bit of an insight into this diverse team. Despite their different gifts and abilities, there are similarities in all of these guys; they are motivated by a love of God, a love of vulnerable children and a desire to keep Reid safe! Here it goes (school photo-style.....)

BACK ROW (left to right)

Popey has coorindated several Medical Team trips to Zambia and completed Break the Cycle in 2010, raising $15 000 single-handedly for Eagles Wings. Popey’s been a public servant for many years, and has recently had one heck of a battle with his health. Despite this, Popey has been the logistics man behind the Aussie Challenge, organising accommodation and chatting to strangers all over Australia to make sure the team has somewhere to stay at every stop. Working from Brisbane, he has kept all of the hosts around the country informed and up-to-date with the team’s progress.  Popey’s contribution to Eagles Wings over the years has been significant and he is a well-loved member of the Eagles Wings family.

Graham too has been a part of many Eagles Wings events. He’s the man behind the cameras, creating and capturing footage and photos of people challenging themselves to educate vulnerable kids. Graham is relaxed and happy with this role, and is appreciated by all those blessed to have the memoirs that Graham has created of their experiences over the years. Graham’s got a gift for capturing the essence of what Challenge for Change and Eagles Wings is all about. His knowledge of Australia has also been appreciated in the planning of The Aussie Challenge.

I think Reid would be okay with me focusing on the support crew for this entry - probably relieved, in fact!

Nat is a Brisbane-based engineer with a massive heart for missions. Nat has visited Zambia several times, and it is a joy to see her interacting with the Eagles Wings children. Her passion for the kids is evident in her work ethic and efficiency in the role of donor coorindator for Eagles Wings Australia. Nat completed The Tassie Challenge in 2012 and is joining the Aussie Challenge team in Perth today. Nat’s a fun-loving and servant-hearted person, who I know will be a valuable team member on the road. Nat has also been terrific in organising the promotional material for The Aussie Challenge, including those wonderful tattoos and our cardboard cut-out-Reid.

Daun is new to the Eagles Wings family, and a very welcome addition! Daun joined the team in Townsville after her residency hearing (keeping our fingers crossed for you, Daun!) Daun is originally from the States and has been in Australia for nine years. She now works at a church on Brisbane’s southside. Daun is a
“do-er” – quick to jump in and get the job done – any job! Apparently she’s a pasta master and just eager to serve. Originally with the team until Perth, Daun has agreed to continue on with the team, which I know is a huge blessing to everyone.

Tiffany is also new to Eagles Wings, and is a wonderful encourager. We have Tiff to thank for Flo’s presence on the trip, and she spent many hours getting vehicle quotes and talking about the trip to potential sponsors. Tiff works for Virgin Australia, but has a plethora of skills that have aided the preparation for this trip. Tiff has also recently caught the cycling-bug, recording a distance PB on the Empathy Ride. Tiff is also joining the team in Perth and is another servant-hearted giver (we’re blessed to have so many of them!)

Dan, together with Reid and Tim, completed Break the Cycle Africa in 2011, cycling 5700km to raise money to educate 200 children at Eagles Wings. Dan’s an EW frequent flyer, having completed every Eagles Wings event since 2010 (probably just about due for a freebee!) Dan’s motivated by the children in Zambia, and is also our numbers and stats guru on the road. Dan’s a Brisbane-based mathematician, and has offered his bike and his car to this trip, so that he can help Reid out on the road whenever necessary. He’s also completed several media interviews, eager to share about Eagles Wings.

Standing on the back of Flo is Lynda, who works as a masseuse in Brisbane. This is Lynda’s first trip with Eagles Wings, and we are all very grateful for her abilities! Lynda spends her days on the road applying huge amounts of massage oil (and sometimes, butt cream!) to Reid’s legs to help him remain as comfortable as possible, also to help his overnight recoveries. Lynda has also learned to dry needle just for this trip. Lynda’s got a bubbly and infectious personality. We’re thankful you’re on the road, Lynda!

Dave is an engineer and product manager who has a passion for social media. Dave has been instrumental in developing Eagles Wings’ participation in social media, and it’s thanks to him that it’s all operating as effectively and smoothly as it is, keeping us all informed about the team’s whereabouts! Dave is working from home as the trip progresses, but his contribution to The Aussie Challenge has been significant. Dave joined Eagles Wings for The Tassie Challenge in 2012 and is a quiet encourager.

Graham (who I’ve affectionately named “Boss” over the years) is our resident cop. Graham coined the Aussie Challenge catchphrase “go with the flow (Flo)” and I think this really sums up his approach to trouble-shooting, organising and problem-solving. Graham has a tremendous capacity to support others and deal with issues as they arise. Graham has been a part of every Eagles Wings event since 2009. Graham and Joayn were part of the building team in 2011, and watching the childrens’ delight as Graham carried one under each arm around Eagles Wings School was a joy. Quite simply – Eagles Wings events wouldn’t happen without him.

Having chatted with the team a couple of times, they're all quite weary but upbeat. There's no such thing as a "typical day" on the road, but each of them are contributing to make sure that all Reid has to do is turn his legs over. Shopping, washing, fuelling up, cooking, chatting to the locals and the media, keeping Reid safe on the road, adjusting plans - doing a great job, guys.

There are many others who aren’t in this photo that are part of the support crew for The Aussie Challenge. The wives, children, families and friends of each of these people are an integral part of the trip. I think particularly of Chan and Jo – you are amazing women! Thanks to ALL members of the support crew, whether you’re family, friends, supporters, sponsors, cycling enthusiasts......you’re all contributors to this journey. We appreciate you.

I grew up in a rural community in Central Queensland and am now a Brisbane-based special education teacher. I’m a people-person – I find getting to know others, spending time with people and hearing their life stories one of the greatest joys in life. I have always had a deep interest in social justice; however this interest was ignited as I completed Break the Cycle 2009. I had the privilege of visiting Ndola in 2011 and fell in love with the Zambian people, their culture, and the joy that they have, despite their earthly circumstances. I’m excited to be a part of the Challenge for Change team and look forward to challenging myself as we advocate for our Zambian friends!